Cecilia Blanco is Coordinator of Bilingual Education and English as a New Language programs in the South Huntington School District and has worked as a bilingual teacher in the district since 1997.  She coordinates a thriving Two-Way Dual Language Bilingual program (K-5), a Transitional Bilingual Program (6-12) and ENL program (K-12).   In her current position, she oversees screening, programming, and instructional supports of newcomer English Learners, including SIFE.   Cecilia was part of the NYSED SIFE workgroup that developed and piloted SIFE screening protocols and rubrics between 2014 and 2018.  She teaches a course on instructional strategies for linguistically diverse students at SUNY College at Old Westbury, and her areas of interest include cross-cultural learning, parent engagement, and creating inclusive environments for linguistically diverse students. Cecilia travels often to Argentina, where she was born and raised. 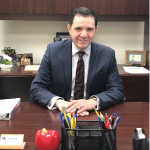 Wilson Castro has been the Assistant Principal at John Jay High school for the past three years. Aside from the usual responsibilities of helping students become academically successful, socially responsible, well-rounded citizens. He has worked arduously along with ENL teachers to make the Bridges program a staple at John Jay. Working with the school’s ENL students has been one of the most rewarding facets of his career. Wilson has worked with ENL and Newcomer students since he began his career in education 15 years ago. As a teacher, he taught Living Environment and Earth Science, and collaborated in curriculum mapping for other subjects for English Language Learners. His goal has always been to establish equity in the way curriculum is presented, for our students, so that they may have a better and greater understanding of the Core Subjects. He describes himself as an English Language Learner who arrived in the United States before learning how to speak English.

Mary Alice Gans is the ENL & Bilingual Department Chairperson for Brentwood High School, which serves 4,250 students. She currently supervises 62 Bilingual and ENL Teachers and a program of 1,400 ELL students at the HS level.Mary Alice is the Supervisor of a SIFE program that includes 50 current and more than 400 former SIFE students. She has worked in the Brentwood district since 1990, as an ENL teacher from 1990-2002, and her current position as Department Chairperson since 2002.She also supervised World Language Teachers at Brentwood HS and was co-chair to the District World Language. In 2017 she received the Scope Administrator Service Award. She is fluent in English and Spanish and has taken three Unbound mission trips to El Salvador with Our Lady of Lourdes RC Church. She and her husband have twin sons adopted from Sakhalin, Russia, who are currently attending Marist college.

Charlene Nieves has been in her current role as the Assistant Principal of Supervision at Newtown High School for over 10 years.  Before becoming an Assistant Principal, she was an ENL teacher for 15 years.  With 25 years of experience, she has seen the challenges ELL/MLs students face in their pursuit to graduate from High School.  In 2014, she and her staff launched a program to serve students with interrupted formal education.  The following year,  Newtown began a partnership with the Bridges team. Charlene received her BA in Applied Linguistics and MA in Elementary Education at Queens College, C.U.N.Y., and a certificate in School Building Leadership and School District Leadership  at the College of Saint Rose.

Wanda Ortiz-Rivera is the Assistant Superintendent of Bilingual and ENL Programs K-12 and Student Intake for Brentwood Unified School District on Long Island, NY. In this role she supervises 260 Bilingual and ENL Teachers and served 6808 ELL students in 2019-2020. Wanda has worked in the District since 2001, first as a Bilingual Dual Language Teacher, Teacher on Special Assignment to Mentor New Teachers, Bilingual/ENL Assistant Coordinator, Assistant to ELA Coordinator, Coordinator of Bilingual/ENL Programs.In 2019 she received the NYSABE Bilingual Education Administrator of the Year Award.Brentwood High School has partnered as Bridges Lab Site since 2016. The district serves more than 500 SIFE. Wanda was born in Puerto Rico and learned English at the age of 16 when she started college in New York. She is devoted to her students and teachers; in her words, “I only have one biological child, but he has 6,808 brothers and sisters!”

Tim Blackburn spent the early years of his career as a high school ESL and bilingual educator in the Bronx, NY. He is a proud alumni of the Peace Corps Fellows Program at Teachers College and International Community High School (ICHS), where he worked and learned with his fabulously talented multilingual students. It was this experience where Tim learned how to design relevant, language-rich lessons for adolescent newcomer multilingual learners. Tim is especially proud of his collaboration with colleagues from ICHS and Bridges to Academic Success to offer support for students who have experienced interrupted formal education.

Tim moved to Oregon in 2012. Since then, he has served as a Teacher on Special Assignment in the Oregon Migrant Education Service Center and Education Equity Unit at the Oregon Department of Education. As a Practice Expert at Education Northwest, Tim served as a consultant to schools and school districts across the country. Tim now serves as the Director of Multilingual Programs for the Tigard-Tualatin School District.